Thoughts on Doctor Who: Flux chapter 3… 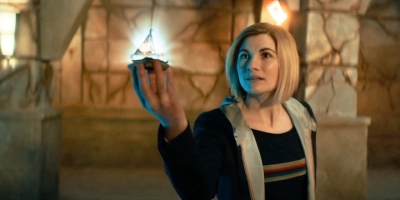 Four of the plotstrands that Chibnall has spun are brought together by this chapter.

The Fugitive Doctor. The Division. Old Swarm. The Temple of Atropos.

A sigh of relief then as these four plotstrands of previous episodes combine to a satifying whole, a glimpse of the mystery of the forgotten incarnations of the Doctor.

If that lessens the mystery slightly there are two scenes which add new mysteries. This chapter continues the brilliant & fresh new style of overlapping puzzles though these two scenes elevate it to greatness.

Scene two. The very exciting casting of Barbara Flynn as Awsok (say the credits), a figure seemingly manipulating both the Flux (a “spatial event”) and Time, through Swarm & Flux. Enigmatic.

The Flux, “it was made… Because of you” she tells the Doctor.

Behind her the scenery, some strands. Some machinery. What is she tending with her dropper of liquid, a shrubbery, a beehive, some vines, the weaving of threads into cloth? A loom? That would certainly chime with the other imagery of threads or timestreams spun by the Mouri from the Temple of Atropos.

Although some of the earlier mysteries of Swarm (introduced as the main villain of the season) & Azure have been resolved halfway through the six chapters, there is now the mystery of what Awsok meant when she said they were “useful” – and the mystery of Awsok.

Chibnall could be delving further into Doctor Who continuity by having Awsok be a new version of the Black & White Guardians but that by itself wouldn’t be a meaningful twist for the general audience. The origin of Awsok will somehow be connected to Gallifrey or the Division (another incarnation of the Doctor?) or explained by the events of these six chapters.

Old Swarm says “…the Division must be so compromising”, and that was part of the drama once the Division had been established last season, that the Doctor wasn’t the Doctor before they were the, err, Doctor. (The same dramatic tension of The Day of the Doctor, that one incarnation seemingly took a timeout from being the Doctor.)

How the Fugitive Doctor has the junkyard’s police-box TARDIS – and whether or not there is any difference between a Divison Commander running from the Division and that person being “the Doctor” – all that is still to be resolved.